As a businesswoman, fitness professional and mother, Wendy Brookman aspires to flying high — though not literally it would seem. Following a recent turbulent plane ride she has developed a ‘late-onset’ dislike of flying. ‘I’d prefer it if they just let me fly the planes. I’ll help them’, she says with a cheeky grin.

From an early age Wendy learned as a track and field athlete the importance of setting goals to achieve her personal best. She also learned that sometimes those goals shift and being successful can mean shifting with them.

A broken collarbone and shoulder reconstruction at age 17 ended Wendy’s ability to compete. But in 2001 when she joined national franchise Fernwood Women’s Health Clubs as a membership consultant, she found a new outlet for her physical energy and competitive spirit. Attending the organisation’s national sales awards that year she identified her new ‘personal best’. ‘I love achievements’, she said, ‘so after that night I set myself the goal to be Fernwood salesperson of the year. Turns out I was lucky enough to win the 2002, 2003 and 2004 award nationally’. 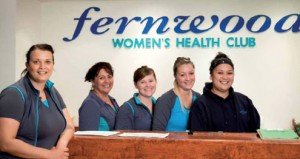 Wendy Brookman with staff at her Canberra health club.

After three years in sales, and wishing to play a more hands-on role in the lives of her clients, Wendy completed her qualifications in fitness training. She began leading exercise classes, and before long was invited to take up a management role at the Fernwood Tuggeranong Health Club. It was in 2005 while juggling the multiple roles of sales consultant, fitness instructor and gym manager that Wendy took on an even bigger role as a mum. ‘I thought I had the whole time management thing down’, she said ‘but having Caitlin gave me a BIG reality check’.

And it was becoming a mum that clarified Wendy’s determination to become a franchise owner herself, and create greater autonomy and financial independence for her family. So after returning to work as manager of the Fernwood Gungahlin Health Club, Wendy and her husband Alan began investigating their financial options.

Wendy identified the Fernwood Canberra City Health Club as the one she wanted to own. She said: ‘My friend Kellie owned that gym and two others... She was taken aback because she thought I was going to buy Gungahlin, which is massive. Canberra City wasn’t doing well, but I transferred over because I wanted to bring the club back to the basics of being a smaller boutique club. And it’s a lot easier to try and remember 700 ladies’ names than it is to remember 1500. I wanted to be able to challenge myself to change the feel of it....I wanted it to be back there in the numbers again’.

After twelve months under Wendy’s management, the Canberra City Health Club was indeed ‘back in the numbers’ and, with the encouragement of Fernwood founder and CEO Diana Williams, Wendy and Alan decided to take those numbers to the bank.

‘We had all the information’, said Wendy ‘and it didn’t look overly pretty, but it didn’t look too bad. But the bank said it’s not on, you don’t have the equity... But I thought it’s got to happen, there has to be another way. I had people talk about silent business partners but I struggled with that. I want people to bounce off me, and I want to bounce off other people, and if you are into something you have to be wholly, solely into it’.

After hearing about IBA through family, Wendy made a telephone call that brought her dream one step closer.

She said: ‘I’ll never forget this day; I had Beth (Higgins) from IBA answer. Had I not had Beth on the line or someone like her, then things might never have happened for me. Because — talk about people bouncing off each other — I rang up and she was just as excited as I was. And all I needed was that one person to be on the same level. And then I thought, this is going to happen’.

IBA provided Wendy and Alan with the services of a business consultant, Lincoln Hawkins of Beaconhill Consulting to assist with their financial and business planning. ‘My family, my staff all call him Mr Lincoln! And when I phoned him it was great because he gave me the same vibe as Beth. And I didn’t get that from anyone else. The banks wanted the numbers and the figures, but they didn’t want to know me, didn’t want to know what we were going to do. IBA wanted to know me, what the business was, and they got how bad we wanted it’.

‘So Mr Lincoln came down and I gave him all these figures, and it all just started rolling… I was excited because I had this 26-page business plan and I thought Mr Lincoln, he’s going to be so proud of me. And he looked at it and said Wendy, this is a great start. And I’m like ‘a start’? But that’s the thing with IBA, they’re thorough.

They showed me things that sometimes new business owners don’t want to see. But you need to see them, not as a deterrent but as things you have to take on board, changes you need to make if you want to be successful. But there were times I thought, man, why are you talking to me about this, why would you do that to me?’

With their revised business plan Wendy and Alan secured a business loan from IBA and in December 2009 became the franchise owners of the Fernwood Canberra City Health Club. IBA’s assessments and settlements team worked with the couple and Fernwood to finalise a tripartite contract. Wendy said: ‘That was one of my happiest times — Neville Jackson from IBA rang up and told me, and he was so excited saying we’re so happy for you, so happy to be a part of it. And I was so unprofessional and was like ‘I could kiss your face off!’ 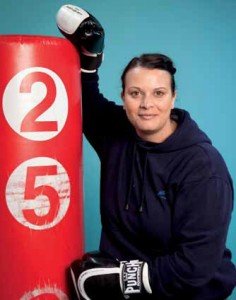 Wendy Bookman is a franchise owner of a Fernwood Women's Fitness Health Club.

However despite her passion, Wendy soon found herself confronted by some personal and business realities.

‘There were definitely figure issues’, she said, ‘and stuff around cash-flow… I had ladies coming in here who were earning a lot of money, you know… And they’d come down and I’d train them for half an hour…and help them to take control, not think about the pressures of their job. And I realised I wasn’t getting to walk away with that'.

And I needed to get into the headspace of being a business owner who could make money and be successful. I was walking away with my bills paid, my staff happy and my members happy — but I needed to change my way of thinking’.

Wendy says that being part of a national franchise provides her with both a business support network and reassurance. ‘We (Fernwood franchisees) all have ups and downs’, she said ‘and my club did hit a bad run for about three months, but that was happening nationally. And I know I can ring the other clubs, or they can ring me and if I’m having a great month they ask ‘what are you doing differently?’

Two years on, and with a second daughter Evelyn, Wendy continues to juggle her multiple roles. ‘It’s about time management — my business, my family and staff — if they’re not all firing at one time it can be really hard. At the same time, when you’re on family, you need to be on family and have got to be in the moment with the ‘where’s my Barbie brush’! And Alan understands the commitment we need to put into the business, but he understands the home stuff too. And he does the drop-offs and makes everything work. And it’s like clockwork when he does it; I do it and it’s like, someone doesn’t have a drink bottle or has different shoes on! How can I run a company?’

As a confidential advisor and panel member for the Advancing Women online network, Wendy now offers advice and support to women seeking to fulfil their career aspirations while balancing family needs and their own health and wellbeing.

As a mother to young girls herself, Wendy is also excited about using the Fernwood Venus Program to assist young Indigenous women in her community to achieve their personal best. She said: ‘Diana Williams developed the program for under-privileged ladies, or ladies just going through a not-so-good stage in their lives. I work with 12 Indigenous girls aged between 16 and 23. That’s the age where we need to get them; they’re growing up, and have so many decisions in their lives. But they are given so much freedom too, which is really hard. So I get them down here and work on things like getting a CV together, or going for job interviews. I get the banks down here to talk about opening a savings account… We talk about fitness, working in the fitness industry...everything. And I love the concept because I know that out of those 12 people, if you change one life that’s going to ripple through a community like you wouldn’t believe’.

Building a community that supports and encourages women from all walks of life to achieve their best is central to Wendy’s vision for her business. ‘For me it begins when a lady walks in. And the thing with fitness training is that it shows people’s true colours. So maybe a client has their corporate persona, their high powered job, but in the gym, in themselves, they feel vulnerable. And I see the change happening, and the confident person they are outside, they start to bring that person in here too. I like watching ladies take control of how they feel. And once you’re inside someone’s life, and help them change like that, you’re part of their life’.

There’s perhaps no better illustration of Wendy’s commitment and passion for her work than her decision to delay her honeymoon until a group of her ‘ladies’ complete their current 12-week fitness program.

Married in February, Alan is keen to prise Wendy away for a trip to Vanuatu. First, though, he may need to convince her to resist the urge to ‘help’ fly the plane, and be content with being a passenger.

Find out more about IBA's Business Development and Assistance Program.