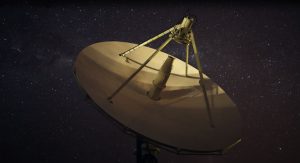 CfAT ground station in Alice Springs NT (photo credit: Since1788 Productions who produced a video on the build - click on the image to view)

CSIRO are working with Australia’s first and only Aboriginal owned-and-operated ground station provider to bring data down to Earth.

The ground station, located near Alice Springs and owned by the Centre for Appropriate Technology (CfAT), will download the data from the NovaSAR-1 satellite as it passes overhead. This data is then sent to the CSIRO so it can be processed and made available to registered users of their national facility for things like agriculture and natural disaster management.

This will mark the first time Australia has managed its own source of Earth observation data.

IBA provided the funding to construct the ground station at CfAT a couple years ago and it launched last year so this is just the next step in the process.

Peter Renehan, CfAT CEO, said access to NovaSAR-1 has the potential to benefit many Indigenous communities, like Indigenous rangers who look after land and sea and can use imagery from space to help do their jobs. It also puts Aboriginal people at the forefront of Australia’s growing space sector.

“It’s important that we can build and own facilities like this right here in central Australia and feel proud that Aboriginal Australians are making such an important contribution to supporting the development of Australia’s sovereign capability in the space industry,” Mr Renehan said.

Read the CSIRO Media Release or check out their blogpost for more detail about the great work of CfAT and CSIRO’s RAP initiatives.