IBA’s housing loans are available to Indigenous Australians buying, in most cases, their first home and who are unable to borrow all of the required funds from another lender (such as a bank or credit union).

The amount that IBA will lend eligible customers depends on factors such as their income, their capacity to meet loan repayments (and other housing costs over the term of the loan), the value of the property they are purchasing, the interest rate, and the loan term.

Depending on these factors, IBA may provide a loan that covers only part of the money required to buy a home. In such cases, customers are required to borrow the remaining funds from another lender, such as a bank or credit union. Under construction: Daniel Rennie and Alex Burbury have a firm grip on their finances and their future.

Daniel Rennie and Alex Burbury admit they wouldn’t have described themselves as “financially savvy” four years ago when they were newly engaged. Since then, pursuing and achieving home ownership has changed that – and much more.

As Program Manager for an Indigenous radio station and State Sales Manager for a gift and homewares company respectively, Daniel and Alex had worked hard to get ahead in their careers.  However, making headway in stabilising their finances was proving harder.

Having made impulsive  spending choices in their youth, each had accrued personal debts which affected their credit rating.

When they got engaged in 2009, Daniel and Alex were renting a home in Brisbane, and had become frustrated with paying off “someone else’s mortgage”. With the encouragement of family, they made a commitment to repair their financial situation in preparation for home ownership.

‘My dad hasn’t owned a home now for the last 20 years, and it was really important to him that when we got engaged we should start thinking about home ownership’, said Alex. ‘He gave us a $1,000 deposit to start our First Home Saver Account Scheme [no longer available], knowing we would need to have that account for four years. He left it up to Daniel and I to make payments every week for four consecutive years. Initially we just put $40 a week in, but as we became more determined to buy, we made a real effort’.

At the same time, the couple were taking control of their spending.

‘We had been living week to week’, said Alex, ‘and at the end of each month we were getting slammed by gas, electricity and phone bills. We thought, “We can’t keep doing this”. So we sat down and wrote a very strict budget to pre-pay everything…  ‘

‘We needed to streamline our finances because I had a personal loan, Dan had a personal loan and a car loan, and we had a store card. So we cancelled Dan’s credit card and now just have one, with a very small credit limit. We consolidated our personal loans and Dan’s car loan into one big loan’.

To ensure the budget is sustainable, the couple allow themselves an individual discretionary spending component.

‘It’s a freedom fund’, said Alex. ‘It had got to the stage where I was asking Dan, “How many coffees have you had today?” and saying, “You know that’s $15 worth of coffee?” But now we don’t fight about money. We get paid separately and 12 hours later most of our two salaries get pulled over into a joint account that pays all the bills. But we keep a little bit of money, and if we want to buy something, we each have the freedom to do it’.

In 2013, with four years of contributions adding up in their home saver account, and their personal spending under control, Daniel and Alex began making enquiries into securing a housing loan.

‘We went to a lender we had both banked with, long before we even started looking at actual houses’, said Alex. ‘We went through all our finances with them, just to see if we would be eligible for finance. We knew we had a bad credit rating in the past, but we thought we were beyond that. They gave us a ballpark figure, but said we would need to formally apply for a loan. We started looking around at houses within that price range, but it was ridiculous. We thought, “We will never be able to get a house for that money”.

A family friend suggested the couple look into IBA’s Indigenous Home Ownership program. IBA housing loans are available to Indigenous Australians who are unable to borrow all of the necessary funds from another lender such as their bank or credit union. In such cases, IBA may provide a loan for part of the finance with customers required to borrow the remaining funds from another lender.  IBA‘s Home Lending staff provide assistance with this process wherever possible.

Daniel and Alex needed such assistance when their bank declined their formal application for the balance of their finance.

‘A big part of it was about communication, and with lots of help from Caroline Sheedy at IBA, we were able to work with the bank to make the mortgage agreement happen’, said Alex.

When their mortgage agreement was finalised in 2014, the couple realised just how much buying their own home had come to mean to them. ‘We just cried and cried and cried, and we bought a bottle of champagne and cried some more. I’m a bit of a crier!’ laughed Alex. ‘That was a good spend of the freedom fund!’

Having control over their finances has enabled the couple to keep that freedom fund while managing two separate mortgage repayments: one with IBA and one with their other lender. ‘We have worked out we need to pay this much for this loan with IBA, and this much for that loan with the bank. And because we have a budget in place, it’s done and dusted’, said Alex. 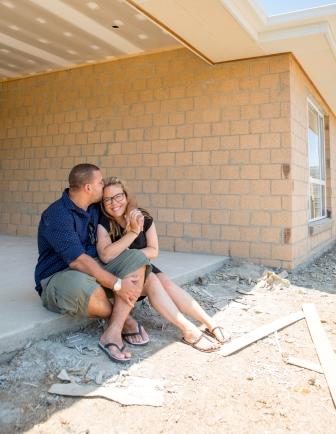 Daniel added, ‘And because we are paying a bit more off our loan than we need to,  if there is a surplus at the end of the year we can choose to take it out and buy something for the house, or leave it in place’.

After initially looking at houses in the inner city, Daniel and Alex changed tack and decided to buy land and build a home further afield.

Daniel said, ‘In the price range we were looking at, our options were a one-to-two-bedroom apartment in the city or a run-down fixer-upper in the city. We have two pug dogs, so an apartment wasn’t going to work for us.  And a fixer-upper? Well, I push buttons for a living so I’m not the handyman type, and that was never going to be a reality. We decided to move further out and build the home we wanted, with everything done and finished for us. And that was basically what we needed to do from a monetary point of view, as well.

Our plan is to gradually work our way back towards the city, but for our first home we are going to be happily living here for quite a few years. It’s a half-hour drive out here but during the construction we would come out and see all the different stages. And when the concrete slab was poured, we were so happy. We were high-fiving and running around’.

‘And I cried, of course!’ laughed Alex.

The couple put their growing confidence to work in sourcing a builder who could accommodate their specific needs while staying strictly within budget.

‘The most important things for us were that we had a big enough backyard for the dogs, that Dan got his man cave (because he likes to watch about eight games of rugby each weekend), that I have my own office (because I work from home a lot), and that our bedroom was at the back of the house. And so we had a checklist, and we were asking the builders, “Is this standard or is it extra? What about that, can we move that without extra cost?” We knew what our budget was and the final build had to be that – not a cent more’.

Daniel and Alex moved into their new home in February 2015 and are now looking forward to adding their own (no handyman-required) personal touches.  Having gained a foothold in economic independence they are excitedly looking at the future and the possibility of eventually purchasing an investment property.

The couple said they would encourage other Aboriginal people considering home ownership to explore their options, do the necessary research and, if in doubt, ask for advice and assistance.

Daniel said, ‘I was definitely funny about asking for advice and help to begin with, thinking, “I don’t need help from anyone, I’m just like everyone else”. There’s a lot of pride and self-respect issues among our mob, worrying about, “Am I asking for a handout?” But I know many Indigenous people do need that help and advice because there are cultural barriers in dealing with banks and asking for money. I hope Alex and I can inspire other people to give it a crack, not to give up, and to push to create the future they want’.

Alex agreed. ‘This experience has given us the opportunity and the confidence to think like that, to think of the future … because we’re on our way now’, she said.

‘As a side effect of this I have been able to set other goals for myself, too, like losing weight, training more and quitting smoking. And Alex is doing the same’, said Daniel.

‘So we’re building health as well as a house. And why go harming your health with cigarettes when you are working so hard to build a house and a future that you might not then get to enjoy? Plus all that extra money from not smoking is now going into paying for our house’.

‘These were things that I thought were never achievable but they are so easy now because we have learnt that if we put everything we have into it, then we can. It’s a mindset: nothing seems so impossible anymore’.